A WOMAN was shocked when she ordered a chic brown jumpsuit from SHEIN, only to be sent something very different.

TikToker Justine Byrne, shared her surprise with a video unboxing the bizarre delivery.

She showed followers what she had meant to order followed by the ridiculous item that came instead.

She said: “I ordered this jumpsuit from SHEIN to go on winter walks. What the f*** is this that has showed up?”

She showed a picture of a curvy woman wearing a flattering brown jumpsuit.

Scottish Justine then showed herself sitting on her bed in her pyjamas, opening up her SHEIN order. 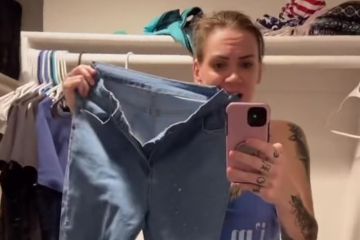 I bought a pair of flared jeans from Shein, people are saying the same thing

She grabbed a blue postage bag and pulled out the item in a SHEIN zip-lock bag.

She started to pull the garment out of the bag only for a brown tail to emerge.

The TikToker looked confused and said: “What the f*** is this?”

As she unravelled the jumpsuit she saw that it had a hood with a monkey’s face on it and laughed in disbelief.

In the next the frame she showed herself having tried on the monkey suit.

She said: “What the hell? Wait till you see!”

She showed herself in the monkey outfit and said: “I just wanted a jumpsuit for going on a walk… it’s got a tail and all.”

The hilarious video gathered more than 100k likes on TikTok and plenty of people rushed to comment.

One person said: “I just love the fact you put it on!”

Another said: “I wouldn’t even be upset if I got that instead of my jumpsuit.”

A third said: “Imagine this coming towards you when you’re walking first thing in the morning in the dark.”